“Silhouetted in the golden glory of a Pacific sunrise, crosses mark the graves of American boys who gave their lives to win a small atoll on the road to the Philippines. A Coast Guardsman stands in silent reverence beside the resting place of a comrade., 1944”

Memorial Day is the Past and the Future

Memorial Day is a day of remembrance of those who paid the ultimate price and the families who lost love ones. I hope that you will spend a moment to reflect upon your own mortality and the blessings for which so many men and women have sacrificed.

Thank you to everyone who has read, commented, or enjoyed any of the postcards I’ve shared here over the last year or so.

Due to other projects, I will be taking a hiatus from posting weekly. I may publish posts intermittently as time allows in the coming months.

Thanks for visiting! Now go send a holiday card to someone you don’t see everyday. 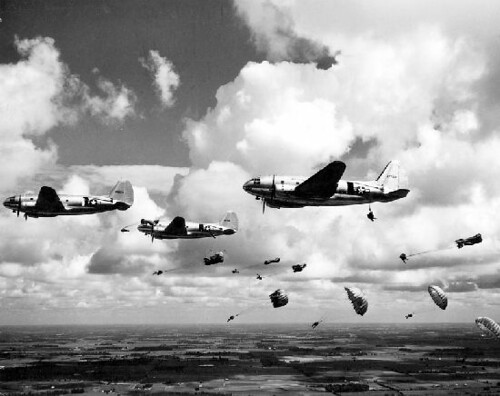 In honor of National Airborne Day, here’s a bit of dark paratrooper humor.

Presumably intended to instill proper respect for the grim dangers of jump school, Blood on the Risers has been sung by U.S. Army Airborne trainees since WWII and follows the tune of Battle Hymn of the Republic.

Blood on the Risers

He was just a rookie trooper and he surely shook with fright,
He checked all his equipment and made sure his pack was tight;
He had to sit and listen to those awful engines roar,
“You ain’t gonna jump no more!”

“Is everybody happy?” cried the Sergeant looking up,
Our Hero feebly answered “Yes,” and then they stood him up;
He jumped into the icy blast, his static line unhooked,
And he ain’t gonna jump no more.

END_OF_DOCUMENT_TOKEN_TO_BE_REPLACED

I was excited to find Buddy’s postcards because of the longer story they reveal.

Buddy was born in 1918. His enlistment record indicates that he worked in the education field and had completed 3 years of college. (I don’t often try to look up the names on my postcards, but since I had so much information, in this case I gave it a shot.)

It seems that Miss Gladys Bell became Mrs. Marress during the summer of 1943.

I have a special passion for finding military postcards because they hit home for me, personally. Many of my immediate family members have served in the military, and I have lived overseas myself. These messages provide a fascinating peek into the daily lives of service members, and I will continue to post more military postcards from my collection in the coming months.

Another view of the Castle [1919 – Marseilles, France] 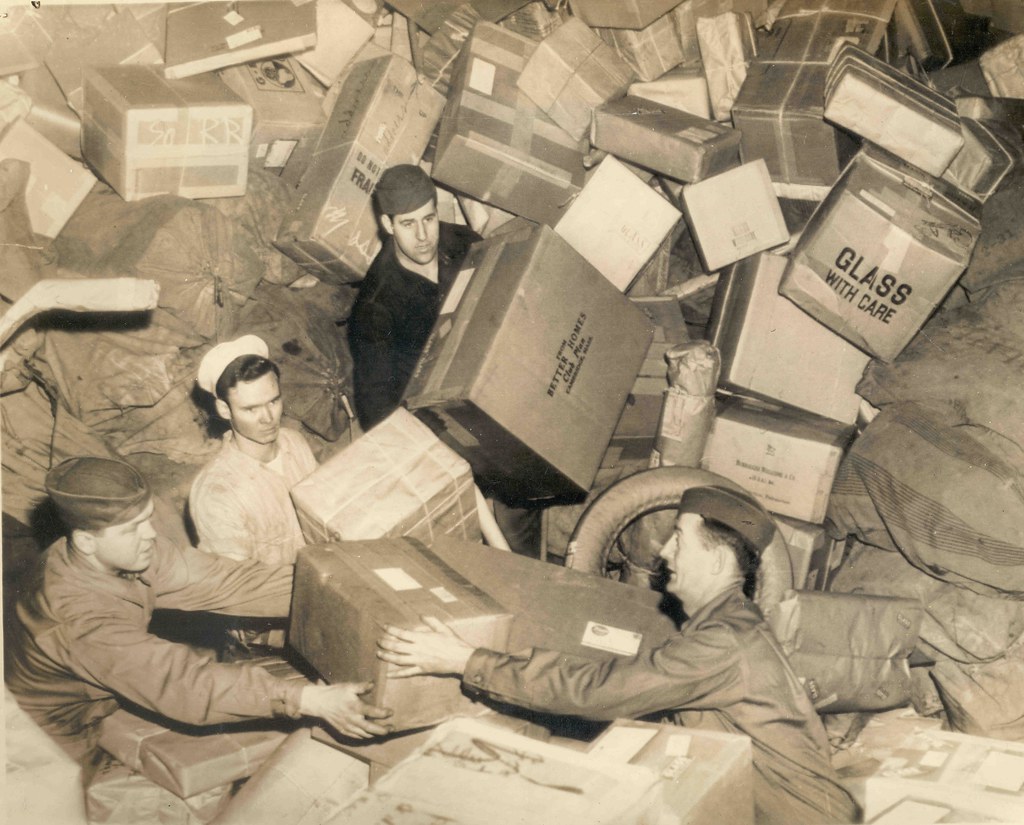 “U.S. troops almost buried by parcels do their best to handle that year’s holiday mail.”

American service members from every generation have fallen, from the Revolutionary War through the present. These are the members of the military who we have lost so far in 2017.

Please remember them and their families. In the U.S., Memorial Day honors those who have paid the utmost price for the freedom of others. I hope that you take a moment to honor those who did not come home and those who loved them.

It seems that the “National –insert cause here– Week” concept has been around for much longer than I thought.

At its introduction, one had to pay a premium for air mail service (24 cents) compared to regular first-class mail (3 cents). With the serious occupational hazards the first air mail pilots endured, I think the price was justified.

According to Edward A. Keogh, 1927, the earliest Air Mail service in the United States carried many more postcards than other type of mail, by a landslide, though the dates over which this tally was amassed is unclear.

Though postcards are becoming rarer, we are now more dependent on air transport of mail than ever. How could we get our online purchases “over-nighted” without our packages continuing to take to the sky?

Side note: Philately is far too competitive for my taste, but I recently learned more about the famous “Inverted Jenny” stamp, the holy grail of stamp collectors valued at about $1 million. The stamp came about because of the rush to produce the 24 cent air mail postage. I much prefer the humanity that is revealed on vintage send postcards, but it’s also a hobby that’s much easier on the wallet than stamp collecting.